Burberry revealed its latest Menswear collection, named “Something Old, Something New, Something Borrowed, Something Blue,” at its custom-built venue in London’s Kensington Gardens on 11 January 2016. The collection was a showcase of the unification of the brand’s different ready to wear labels and styles.

British singer-songwriter and 2015 Mercury Prize winner Benjamin Clementine accompanied by a specially created band including a cellist and The Libertines drummer Gary Powell performed at the event, entertaining guests with his hits such as “Condolence”, “Nemesis” and “Adios” from his debut Mercury Prize winning album “At Least For Now”.

The Menswear collection celebrates outerwear shapes redefined for relaxed weekends, including trench coats, topcoats, duffle coats, military pea coats and parkas, and introduces a new bag shape The Satchel alongside new shoe designs The Driver and The Derby. The show also included looks from the latest women’s Pre-Collection, which debuted in November 2015.

Womenswear Pre-Collection: Highlights from the collection shown today included lace dresses, ultra-luxe sportswear and tailored boot-cut trousers as well as The Rucksack and The Belt Bag.

In acknowledgement of the sad news about David Bowie announced earlier on 11 January 2016, several of the models wore glitter eye make up tributes in his honour.

Key items from the new collection were available for purchase and personalisation on Burberry.com for 10 days after the show, giving consumers the opportunity to own pieces from the runway months before they arrive in store, as part of the brand’s Runway Made to Order service. 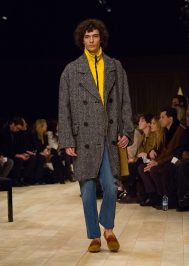 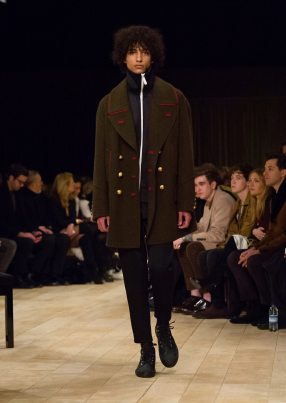 Burberry stores in Malaysia are located at Suria KLCC, The Gardens Mid Valley and in Parkson Pavilion.